In modern day Literature, classics are those Literary masterpieces that every human should read. These classics can be considered Great Literature for the mere fact that they are known be written by authors who's writing transcends throughout time and is still able to provide current generations with meaningful knowledge about what it is to be human. This is often achieved through the theme of the literary work, by means of culminating the setting, the plot, and it's characters, and the results being the reader has learned something new and important about himself, life, or the world.

But what is THEME when it comes down to Literature?
We can see from these different sources that Theme is this central idea or concept in which a story revolves around and elaborately delivers through plot, setting, and characters to tell it's reader, "Hey you should consider this idea, it may help you understand who you are, what to do, how to see life, etc." Going back to what classics and great Literature are, themes must take another step, and become a Universal Theme. What sets the ordinary book themes from the classic's universal theme is that the universal theme applies to any person, regardless of his/her gender, race, ethnicity, religion, but most importantly, it applies to any time period in history. It is an idea that endures through the ages and applies to any given time. It provides the mind with nourishment, progress, and growth.This is a characteristic that Shakespeare's plays have and makes them so notorious in High School Literature. It's because this man's theatrical genius and ability to provide a side view to common issues that people encounter in their lifetimes. It's this that it makes it quintessential for new generations to know of these problems and develop a personal perspective regarding that issue. It is what separates ordinary Literature from classic Literature.

What must be understood about universal theme is that it is a simple idea portrayed in a specific way that focuses the reader's mind to think about a specific aspect of that idea that the author wants to communicate. It is through this where the beauty of universal theme comes in; the reader may interpret the perspective the author provides in anyway that fits his/her life.

Examples besides Shakespeare that consist of a classic tier include George Orwell's 1984, Tim O'Brien's The Things They Carry, A Tale of Two Cities by Charles Dickens, and many more. Based on the Western Canon, a Literary movement known as the Great Books movement emerged around the 20th century. Led both the University of Chicago's president Robert Hutchins and his collaborator, Mortimer Adler, compiled a list of books was created, classics that were thought to provide an insight to what it is to be human. Taking 1984, George Orwell's classic dystopia it's theme revolves around perspective of what it would be like to live under an totalitarian government. The conflict of this book is focused on the Real vs. Ideal, where the oppressed life of the protagonist is mocked by the all that which would symbolize freedom.

These classics follow different types of conflicts such as: 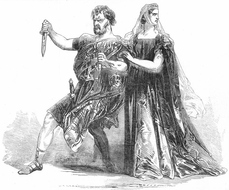 Throughout William Shakespeare's life, he composed approximately 38 plays. From which tragedies such as Romeo and Juliet, Julius Caesar, and Macbeth were part of. Hacing unique characteristics, a tragedy was among the type of Shakespearean play who's grim environment that set up a supernatural world. In it, it's protagonist, it's hero, is a person who at first hand comes across as someone pure in intente, but has a fatal flaw that sets him/her apart from the rest of the characters. Such tragic plays that Shakespeare's created often end in with a sad conclusion where it is common for the protagonist to be set apart from the other characters.

Elaborating on Macbeth, a perfect example of a tragic play, the main themes to this tragic play is how greed and ambition is capable of twisting a man's actions and leading him commit atrocities. Within the play this theme is impersonated by the protagonist, Macbeth, who's own greed and ambition for the crown lead him to kill the King that the served. Even though Macbeth is portrayed to be moral and compassionate, his own character is subverted once it faces his thirst for more power. This is evident when Macbeth talks to his wife, Lady Macbeth, and resists the idea of murdering the King and even before he was about to through his dialogue, it shows that he didn't want to kill the King. It is the guilt and paranoia that take effect from the further bloodshed, that shows that Macbeth had a good side to him that conflicted with the the evil actions he took. It is here where the conflict of Good vs. Evil comes in. Macbeth is the victim of Lady Macbeth's pressure and the three witches prophecy which lead him to go against this good will and become a tyrant.