Welcome to Dr. Shakespeare's clinic! Here, we'll explore the Bard's insight into the human psyche, and the plague of his tragic characters: mental illness.

To this day, Shakespeare continues to astound us with his power to create very human characters. When we experience his plays, we identify with the love, anguish, fear, triumph, and disasters that these people face. We can have this connection because the Bard's characters show some level of truth; they are sufficiently human. Often, his characters showcase very complex behavioral problems. Shakespeare's tragedies, in particular, are marked by his uncanny ability to depict mental illness and disorders.

Macbeth, King Lear, Hamlet, and Othello form the cornerstones of Shakespeare's travails into the world of the psyche (1). In particular, we will investigate two characters from these works who show signs of mental illness or disorder: Lady Macbeth 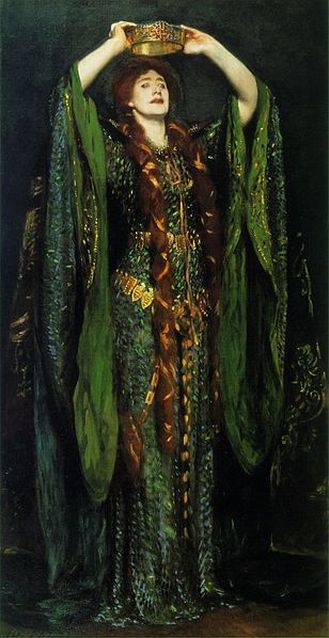 Lady Macbeth is perhaps one of the most powerful Shakespearean examples of a haunted mind. Naturally ambitious and power-hungry, Lady Macbeth slips into madness (along with her husband, Macbeth) as she tries to satiate her unquenchable desire for power.

Symptoms/Possible Diagnoses:
Post Traumatic Stress Disorder (PSTD): This occurs as an effect of witnessing a traumatizing event. The Lady has aided in the homicide of the King and Banquo. This, compounded with the mental instability of her husband, most likely led her to develop PSTD. Symptoms include reliving the horror of the event, depression and feelings of meaninglessness, with oscillations between emotional detachment (or avoidance) and arousal (2). Throughout the play, Lady Macbeth constantly exhibits these symptoms; they are deeply rooted in her character.

Obsessive/Compulsive Disorder (OCD): This behavior is the interchange between obsessions and compulsions. Obsessions are thought processes that cause a great deal of anxiety--for example, images or impulses that are constantly on the subject's mind. Compulsions are acts that are designed to counteract the obsessions, to decrease the level of anxiety (3). Lady Macbeth is consumed with thoughts of the atrocities that her husband and herself have committed, and with the fear of being discovered. Her compulsive way of dealing with the obsession is the constant washing of her hands. This irrational behavior is an integral part of OCD.

Parasomnia: A general term to describe abnormal behavior during sleep, such as sleepwalking (4). Lady Macbeth displays intense episodes of parasomnia after the murders of the King and Banquo. According to Professor Nick Dale, it is very likely that this episode was "perhaps triggered by the traumatic memory...of the murder of [Banquo]." (5) This supports our conclusion that post-traumatic stress disorder may be the root cause of Lady Macbeth's ailments. 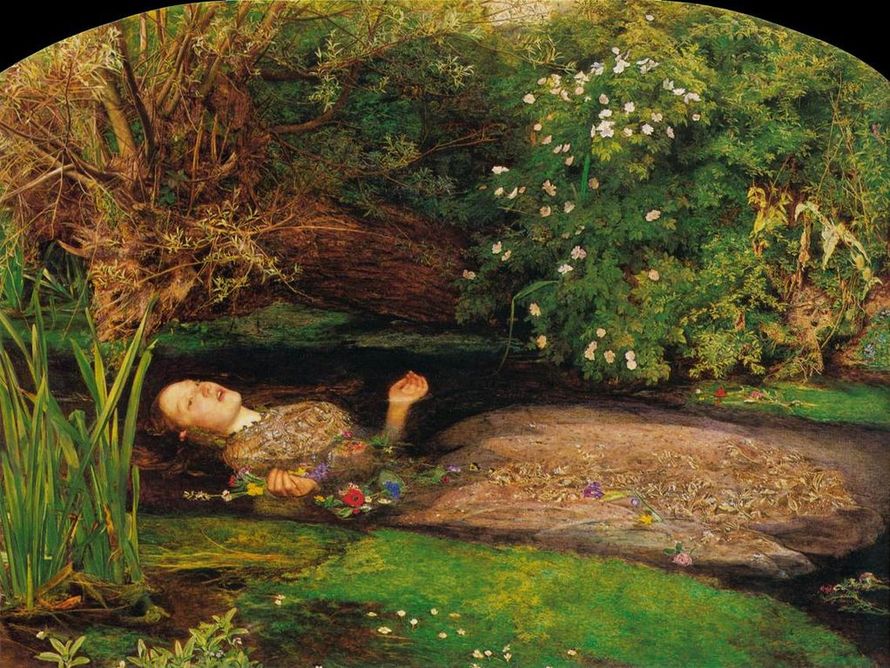 Over the centuries Ophelia, of the tragedy Hamlet, has evolved into a symbol of vulnerability and misfortune. Whereas Lady Macbeth developed mental disorders directly linked to her own actions, Ophelia is more the victim than anyone else. Her father, brother, and love interest (Hamlet) cause her suffering that leaves her mentally crippled (9). She takes her life away in a pond (as illustrated in Ophelia by Sir John Everett Mallais (above).

Symptoms/Possible Diagnoses:
Victim of psychological abuse: Ophelia is subject to emotional and mental abuse, especially at the hands of Hamlet, who suffers from deeply-rooted mental illnesses himself. Symptoms of a victim suffering from psychological abuse include (10) (11):

Inability to individuate: Individuation is the process of distinguishing the self. This natural process is necessary to growth. When individuation is not nurtured in a healthy environment, or when individuation is discouraged (as in Ophelia's case (7)), severe emotional and mental consequences can result. Mary Pipher, the author of Reviving Ophelia: Saving the selves of adolescent girls, wrote:

"As a girl, Ophelia is happy and free, but with adolescence she loses herself. When she falls in love with Hamlet, she lives only for his approval. She has no inner direction; rather she struggles to meet the demands of Hamlet and her father. Her value is determined utterly by their approval. Ophelia is torn apart by her efforts to please." She continues. "Ophelia died because she could not grow. She became the object of others' lives and lost her true subjective self."(8)

Ophelia does not have the ability to separate herself from the desires and wills of others. She does not grasp that she has a self. When her father dies, and Hamlet abandons her, she has nothing else to live for.

Hysteria: For hundreds of years, hysteria was a condition considered to be unique to females--is was a "sickness of the womb". Shakespeare most likely intended to assign this illness to Ophelia. Hysterical episodes were characterized with uncontrollable fits of emotion, anxiety, and confusion (12). Ophelia became hysterical after a nervous breakdown, which culminated into her death.
Works Cited:
(1) Black , Jeffrey . "Elements of Tragedy ." The Tragedies of Shakespeare. N.p., 3 Dec. 2009. Web. 8 Jan. 2013. <students.cis.uab.edu/black790/Shakespeare%20Home.html>.

(11) "Domestic Violence and Abuse: Signs of Abuse and Abusive Relationships."Helpguide helps you help yourself and others. N.p., n.d. Web. 10 Jan. 2013. <http://www.helpguide.org/mental/domestic_violence_abuse_types_signs_causes_effects.htm>.