Up until the 1500s theater acts traveled around the country, nobody had special buildings for plays to take place.When Queen Elizabeth I took the throne laws were passed against wandering vagrants and beggars. The traveling caravans of actors were suddenly criminalized, unless they had the support of someone of nobility. With the new laws the wandering actors were legally criminals and could no longer move around. This is probably why people began building their own theaters.

The first theater built in England, for the sole purpose of presenting plays, was called "The Theater". Built in 1576 by the Earl of Leicester's Players, the theater's design was based on "bull baiting" and "bear baiting" yards, places back then where people would watch animals fight for sport. There were two main types of theater designs, the "public theater" and the "private theater". "Public theaters" were open air, amphitheater types. "Private theaters" were smaller and more expensive, they look a lot like modern theaters. [1]

The time period didn't just affect architecture of theaters, the content of plays changed as well. Plays in the Elizabethan era moved away from the common religious themes that were so prevalent in pre-Elizabethan times, and moved towards a more secular realms. Comedies, dramas, and tragedies were the basic bread and butter of Elizabethan drama. People enjoyed learning about the history of their country through plays like Edward II, Henry V, and Richard III. People also liked attending plays because they tended to be very lewd, sexual innuendos and sexual situations were abundant in Elizabethan plays. [2] 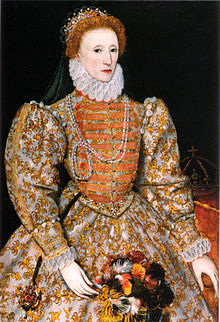 The Elizabethan era gets it's name because it is the time during Queen Elizabeth's rule in England (1558-1603). This age is often referred to as a "golden age" of England's history, since it was a time when poetry, literature, and music flourished. The era is known especially for its theater. Shakespeare, and others were writing plays that broke free of past styles. This "golden age" also sparked an age of seafaring exploration, leading to the enlightenment, and the discovery of the Americas.

The poetry, literature, and music of the Elizabethan era showed how idealistic and generally happy the people were. Musicians were in high demand at Court, country houses, churches, and at local festivals. There were two main styles employed by musicians at the time, madrigal, and ayre. Madrigal was unaccompanied vocals, with the number of voices varying from two to eight. The video linked below, April is in my Mistress' Face by the Hilliard Ensemble, is an example of a madrigal. An ayre is a solo song usually consisting of three parts accompanied by a lute. John Downland's song Flow My Tears is an example of an ayre.

Elizabethan times were mostly a time of peace. This almost wasn't possible, since in 1588 Spain attempted to invade England with their armada. Luckily Queen Elizabeth had decided to bolster their navy and allowed advances in England's ship design. When the Spanish armada attacked they were completely destroyed by the English navy. The English were incredibly lucky to have beaten the Spanish. The Spaniards had a much larger navy, and their men were better trained. England's defenses were sub-par, thinly spread, and lacked full training. They were lucky to have succeeded against the Spanish armada. [3]

Notable People of the Elizabethan Era 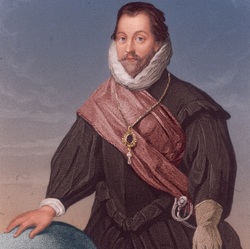 Sir Francis Drake was an English explorer and privateer. He made one of the first English slaving voyages, bringing slaves from Africa to the New World. After the slave ships were attacked by the Spanish and all but two were destroyed the Spanish became lifelong enemies of Drake.

In 1572 Drake led a marauding expedition, commanding two ships he sailed throughout the Caribbean attacking Spanish settlements, and capturing the port of Nombre de Dios on the isthmus of Panama. He sailed north along the South American coast attacking Spanish settlements and seeking out a passage to the Atlantic. To return home he turned west and sailed across the Pacific, on his return he was recognized as the first englishman to circumnavigate the globe.

In 1585 he sailed to the West Indies and the Florida coast where he sacked Spanish cities. On his way home he swung by England's Roanoke colony to rescue its surviving inhabitants. In 1587 Drake sailed into the port of Cadiz and destroyed 30 Spanish ships that were assembling against Britain, later he was an admiral when England fought the armada.
On January 28, 1596 Sir Francis Drake died of dysentery off the coast of Portobelo, Panama. [4] 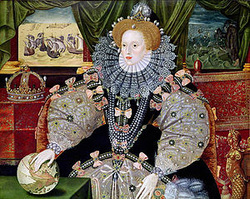 During her life Elizabeth was implicated in two plots to overthrow the throne for herself. First was after her father's death and her brother became King Henry VI, being too young to rule at the age of nine their uncle, Edward Seymour, became protector of England. Their other uncle, Thomas Seymour, became jealous of the young Henry and attempted to kidnap him, resulting in his own death. Elizabeth was implicated because Thomas had been attempting to marry her, she was able to convince her interrogators otherwise, though rumors still circulated of an affair. The second time happened after her brother, Henry, died of prolonged illness in 1543. After a brief struggle for the throne against the Duke of Northumberland and his daughter, Elizabeth's sister Mary became Queen Mary I. Mary wasn't a very popular monarch, and some men began conspiring with Thomas Wyatt to seize the throne. No one knows whether or not Elizabeth was part of the rebellion, or had any knowledge of the plan to seize the throne from Mary, but she was still taken to the Tower of London as a prisoner. She was kept there for two months, despite no evidence of her involvement. She was then moved to Oxfordshire for a year, until she was allowed to return home. Elizabeth finally took the throne in November of 1588. [5] 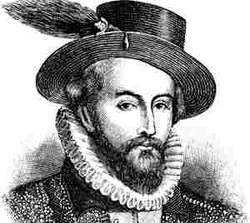 Sir Walter Raleigh was an english author, adventurer, and poet. He was also the person to establish the first english colony in America.

In 1578 Raleigh sailed to America, this may have caused his ambition to create a colony there. In 1585 he did just that, by sponsoring the first english colony in America, Roanoke. The colony ultimately failed, though its failure is shrouded in a bit of mystery. During an expedition to one of the islands off the coast of what is now North Carolina there was a storm, trapping almost all of the men on the island for longer than they had expected. Upon their return to the camp they were surprised to find that it was completely empty none of their wives, nor children were there, everyone just disappeared it seemed. Another attempt at colonization failed in 1587. Despite these failing Raleigh is responsible for bringing potatoes and tobacco to Britain, as well as making smoking in court popular.

Raleigh soon became a favorite of the Queen. He was knighted and became part of the Queen's Guard in 1587. He also became a member of parliament in 1584. In 1592 the Queen learned of Raleigh's secret marriage to one of her maids of honor and became furiously jealous, having them imprisoned in the Tower of London. After his release Raleigh attempted to find "El Dorado", the fabled land of gold, unsuccessfully, to win back the Queen's favor.

After the Queen died, Raleigh became unpopular with her successor. In 1603 he was accused of plotting against the kind, and ended up serving 12 years imprisoned in the Tower of London. During this time he wrote "History of the World". In 1616, after his release, Sir Walter Raleigh led another failed expedition to find "El Dorado". Once he returned to England he was sentenced to death for attacking the Spanish on his voyage against the King's orders. He was executed in October of 1618. [6]