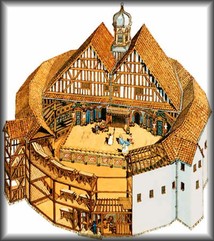 The Globe Theater was completed in a large circular construction that was partially covered with straw roof leaving the center exposed. It somehow looked like a modern soccer stadium. The main stage was located in the center surrounded with audience seats. The stage was 44ft wide, 23ft long, and 5ft above the ground so that it provided good views to people from different places. Behind the stage, there were changing rooms and above the stage, there was a balcony which was used as playhouse boxes. On the third floor in a small house-like place, actors had announcements, waived playhouse’s flag, and advertised plays.[2] Members hanged a slogan above the entrance that said “Totus mundus agit histrionem” (the whole world is a playhouse) and a crest which Hercules carried globe on his back.[2]

Even though the original Globe Theater was destroyed, the new replica revived its old building with modern version. The replica was enlarged and recreated with the similar designs from the previous theater. It was rebuilt in the same location as the original theater was constructed. People put efforts on the new theater in trying to revivify the Globe Theater. As a result much of the structures are similar and even the thatched roof was recreated.[2]